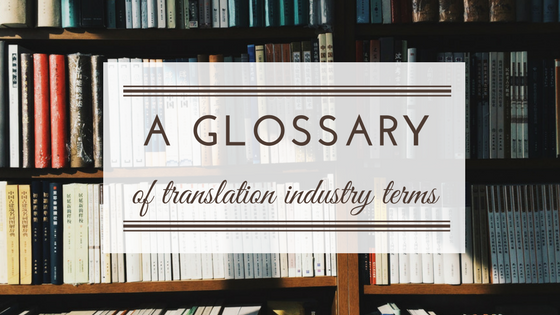 Like any industry, the translation business has its own jargon. We’ve created this glossary to help you understand some of the most commonly used terms.

CAT tool: CAT is a commonly-used acronym for computer-aided translation. Translators use CAT tools because they offer an arsenal of features to make translation easier, such as translation memories, glossaries, formatting, and more.

Glossary: A glossary is a list of words in the source language, and their preferred translations in the target language.

Native speaker: Broadly speaking, a native speaker is someone who learned a language beginning in infancy or early childhood. For a detailed examination of what it means to be a native speaker of a given language, we recommend this article, which uses research on second-language acquisition to identify characteristics common to native speakers.

Source language: The original language of a document. For example, if we’re translating a document from Korean to English, then Korean is the source language.

Target audience: The group of people for whom a document is intended. There are many ways to define a target audience, among them age, geographic location, reading level, expertise (or lack thereof) with the material, profession, level of education, etc.

Target language: The language of the finished translated document. If we’re translating from Italian to English, English is our target language.

Transcription: Transcription is the process of listening to an audio recording and producing a written version of its contents. Transcription isn’t technically part of the translation industry, but it’s a service offered by many language services providers, and it can be one step in an overall translation workflow.

Translator: A translator takes written documents in one language and translates them into another.

Photo by chuttersnap on Unsplash