There’s a story often told to illustrate the value of hiring expert translators: when Chevy launched the Nova model in Mexico, they failed to take into account that ‘Nova’ translates into ‘No va.’ While this story is an apocryphal tale, there are plenty of examples where businesses — up to and including major corporations — failed to take into account the importance of translation, and while the end results may be funny, they also can have consequences.

For example, one Starbucks franchise set up a sign directing customers to ‘Exit Here,’ and translated the phrase into Spanish as ‘Éxito Aquí.” Spanish-speakers know that you can’t just add an -o to the end of an English word and get the Spanish equivalent. Éxito, in Spanish, means success. Instances where a word in one language looks like it should be the exact translation of a word in another are so abundant that there’s a name for them: “false friends.”

A translator who isn’t skilled in the source language might mistake one homonym for another. For example, the blog Language Log recently published an image of an alcohol display in a duty-free store. The word Spirits is translated into Chinese, but the translation selected refers to ghosts or supernatural beings, rather than liquor. 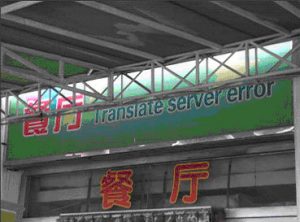 Sometimes businesses will rely on a machine translation of their text, without being able to read the output in the target language. This can result in completely incorrect translations, such as this restaurant in China which has a sign bearing the English name of Translate server error, as reported by AdWeek in 2008. Restaurants in China are notorious for translation errors in general – one of the more comical is a menu that offers up “stir-fried Wikipedia with pimientos.”

Literal translations can also trip businesses up — American Airlines once advertised the leather seats on their aircraft in Mexico using the slogan Vuela en cuero, a literal translation of Fly in leather. Unfortunately, en cuero is an idiomatic phrase in Spanish that means naked. In other words, American had just invited business-class travelers in Mexico to fly in the buff.

American brands will often leave certain words in English when marketing products overseas. This can work in their favor — English product names can lend a certain cachet. However, it can also backfire, as in the case of Clairol’s Mist Stick, a curling iron. As it happens, mist in German translates to manure. As you can imagine, a hairstyling tool called the Manure Stick wasn’t about to be a big seller.

One of the most important things to consider is that with the power of the Internet, a bad translation can go viral. The BBC used Google Translate to render the inscription on a gravestone in Hebrew for its show Episodes; the words dearly missed were translated as pickled at great expense, causing a sensation in Israel. And who can forget the original viral mistranslation, from a Japanese video game in the 1980s: all your base are belong to us, an ungrammatical translation of all of your bases belong to us. This went viral in the early 2000s, and is regarded as one of the first memes popularized by the Internet.